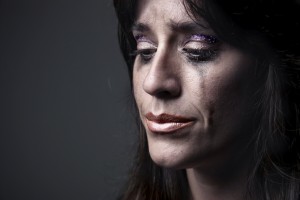 This is about the emotional toll of ‘Back to School Night’, and the fine parents I met there.  Fine parents?  Say what?  You thought I was going to go on about the crazy parents I’d met.  Let’s save that one (well – there’s a lot more than one).

So, what was the good news that was sad?  I’d be talking with friends and saying that last night was ‘Back To School Night’ and they’d ask, “How did it go?”  It was a good night when I could say, “It went pretty well.  I didn’t make anybody cry!”

I wasn’t trying to make anybody cry.  It’s just that sometimes an honest answer is… bad news – and too many times I’d see good, caring people (parents and kids) weep in pain and frustration.  For example:

Steven was a bright kid.  Unlike the majority of my students who had just been passed along due to de facto social promotion, Steven had all the cognitive ability, math background and academic skills to be an ‘A’ student in Algebra.  He just refused to do any work.  He rarely came to school.

Now I had a deal with my students that if they could demonstrate they knew the material by taking the chapter quizzes and tests and passing them, they’d get credit without having to do every assignment [proficiency based assessment & promotion].  This was perfect for Steven.  With his background knowledge and skills he could have easily passed Algebra in no time.  However, he completed about one assignment a month.  When I tried to talk to him about it, he was blasé.  He said he didn’t care and I couldn’t get a straight answer out of him as to why he didn’t care.  Within the limits of the law and public school there was no promise of reward, or threat of punishment, that would get him to come to school and do some work.

We called home when he was absent.  We sent home regular progress reports.  But it wasn’t until ‘Back To School Night’ that I finally got to talk to Steven’s mom.  She was thin and frail looking.  Her eyes showed she was hoping for the best but expecting the worst.  I told her I was sorry.  I tried to soften the blow, but how do you tell a parent that their pride and joy has the talent to succeed but just doesn’t give a rat’s ass and refuses to try?

I wanted to run away.  As the tears streamed down her cheeks, she sobbed, “I don’t know what to do.  I’m a single mom.  I get up at 4 a.m. to catch the bus for a two hour ride to get to work by 8.  I tell Steven to set the alarm and get up but I can’t be there to see that he does get up.  On my days off, I ride the bus with him and watch him go on to campus.  Then later I get a call saying he wasn’t in school today.  I don’t know what to do.”

I promised to do my best to help but it felt as if I had just experienced ‘the death of a thousand cuts’.

I recommended Steven for counseling, but you have to come to school to get help.  I couldn’t learn what was eating him, and I never could win him over when he did come to school.  One day after Steven made a particularly rude response to my offer of help, I’d had it and I hissed, “How dare you speak to me with disrespect after I had to endure your mother’s tears.”

Like I’ve said before, “It’s a good night when I don’t make anyone cry!”