Sex Abuse is in the news again.

Sex abuse is in the news again. We’ve heard very disturbing accounts from the accusers. We’ve heard strident denials from the ‘alleged’ offenders. And we’ve heard outrage from pundits and politicians. But we haven’t heard (much, if anything at all) from those parents and teachers, like me, who are trying to teach appropriate conduct, particularly as it pertains to sex, romance, and preserving each other’s dignity.

I don’t have any clear cut answers. I do have some guiding questions, and I do have my own experiences which I offer here. Make of this what you will. I believe that if we don’t share as much information as possible we won’t ask the right questions; and if we don’t ask the right questions we won’t arrive at the right answers. So I offer these experiences as additional information in our mutual quest to teach those around us to treat everyone with dignity and respect.

So what did I try to teach?

I always tried to teach my kids, “Yes means, ‘Yes.’ No means, ‘No.’ And Maybe means, ‘I might be open to negation at a later date.’” I would try to clarify it further by saying, “Just because you think something is okay doesn’t mean that everyone else does. You should be conscious and respectful of the feelings and boundaries of others. And… if you do step over someone else boundaries, an apology is a sign of strength, not a sign of weakness.” It seemed like a simple way of communicating ‘do unto others’ (Luke 6:31). You’d think teaching it would be pretty straight forward but it wasn’t. I had problems with people’s contrary nature from the start.

[Author’s note: This is a dynamic regarding personal dignity and is not restricted to sex but for ease of writing I will say mother when it could be parent, father, guardian, grandparent etc. and when I say lady it could mean any gender or person].

What Mama taught me:

As I have said in other writings, I grew up working class, on the south side of Chicago. Every evening Dad would come home with a copy of The Sun Times. This was at a time when Ann Landers wrote the advice column for the Times. Mom was a big Ann Landers fan. In teaching me about how to treat girls (as well as others) Mom would frequently cut out Ann Landers’ latest column and make me read it. It was usually some thing about how girls really appreciated a boy who was polite and kind. I always thought such lessons were unnecessary because I wanted to be treated with kindness and politeness too – who wouldn’t? I already agreed with Mom and Ann Landers.

I had no trouble with treating women with respect and kindness because I was raised in a matriarchy. I figured women already ruled the world. Yeah, I had a Dad who lived with us, but Dad was smart. He knew Mom was good with money so she handled the finances. Mom was good with people so she ruled the 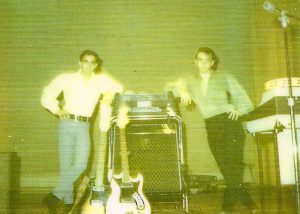 roost along with my Irish grandmother and great grandmother. And in little Italy, Nana DeVuono, my Italian grandmother ruled her household as well. Dad wasn’t lazy, selfish or weak. Dad just loved Mom so much that even when she was a little wacky (like letting her sons practice rock & roll in the basement!) he put up with pretty much whatever she wanted. The lesson I learned was: Women want to be treated with respect, kindness and politeness and real men – smart men do so!

Then the real world took Ann Landers and Mom and threw a monkey wrench at them.

8th Grade, the In Crowd and the Chicolini sisters

Just about every school has some version of the In Crowd. My 8th grade class did, but I wasn’t part of it. Every school has it’s beauties that set all the boys’ hearts a flutter. The Chicolini sisters were two of the most desirable girls at my school. They were dizygotic (not identical) twins pursued by the In Crowd and pined over by the rest of us.

One day at recess, I saw Banjo Billy Stokowski (the alpha of the In Crowd) chasing Annette Chicolini who was loudly screaming, “No!” while laughing uncontrollably. Billy caught her near a playground drinking fountain which he had stuck so it was flowing copiously. Billy took Annette (still screaming, “No!” and laughing) in his arms and sat her on the flowing drinking fountain soaking her from the waist down. The next day they were going steady.

Now don’t get hung up on the idea of 8th graders going steady. That’s a subject for another discussion. The questions for my young mind were some sort of variations on:

So I asked Mom, “How in the world is that an example of ‘girls really appreciate a boy who is polite and kind?’ I just don’t get it.” Mom told me that people are raised differently but she better not hear of me doing anything like that to a girl! No problem – I knew/know I couldn’t do it. How do I know I couldn’t do it? I believe and I teach the lesson I learned from Motown 1962 and the Marvelettes:

But that was long ago.

My students would say, “Yeah Mr. D. but that was long ago. Didn’t you have to watch out for dinosaurs when you were in 8th grade?”

Blowing past snide student humor I’d say, “Okay. But if I did have to deal with dinosaurs and I’m still here I must be plenty tough; so think about it. While you’re at it: Here’s a current events story from L.A..”

I was working at a west side middle school as a long term utility substitute. In violation of Union rules, I had ‘5 preps’ which means I had to prepare for five different subjects. [Union rules say that for teachers of middle school though high school in LAUSD, the school can only require 3 preps – but I was trying to make a name for myself and keep working, so I volunteered.] It meant that I had to get to school by 7 AM to prep and I frequently stayed until 5 PM or later grading and prepping. Seems crazy but steady work is really valuable when you are a substitute teacher with rent to pay.

That school was a large group of very spread out bungalow style rooms (a design from back when land in California was much cheaper). I was in what had been a drafting classroom, on the very edge of the campus, by a parking lot exit. It was around 4 PM and I was just about finishing grading papers on a mild Spring day. I had my doors and windows open.

Suddenly, I heard a young girl screaming, “Help! Rape!” As I bolted from my room to investigate I heard female squeals, female laughter and more cries of “Rape!” The screams were coming from a car parked on the street just next to the school’s driveway. Inside the car were four kids from our school, three boys and the screaming/laughing girl. I recognized two of the boys as students of mine. They were doing their very best to look innocent and invisible.

I was in a rage and demanded, “What’s going on here?” The girl was still giggling as she said, “Nothing. We were just playing.” “ Yeah? Well, Homie don’t play that!” Even though I was a sub, I had dealt with enough people over the years and done enough teenaged interrogations to be able to tell fear and lying from foolishness and truth. I looked each kid in their eyes and I figured they were indeed just playing. So I yelled for a while trying to emphasize the danger of crying rape when there was none. Hadn’t they heard the story of the boy who cried wolf? Apparently not. And I asked them the important question, “What are you teaching each other about how boys and girls should behave?”

That’s what this is all about. It’s not about shaming or blaming these girls for putting up with rude behaviors or for not recognizing what they are teaching the boys. It’s not about blaming the boys for their boneheaded inappropriate behavior. It’s about recognizing that not every one is brought up the same way. Trying to overcome bad information from home or the street is harder than most people realize. [See what I ran into when trying to teach about condoms.]

I have heard calls for there to be mandated sexual harassment classes for everyone from businesses, to police, to teachers, to federal employees. We can’t wait until people are grown to teach about sex abuse or what constitutes appropriate behavior. The examples above are a tiny fraction of the crazy, sexually inappropriate behaviors I have witnessed both at school and out in the adult world. We can’t rely on parents alone and we have to start early.