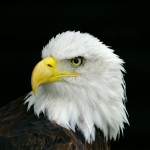 I was sending Jamal to the office because of his disruptive behavior. As he was leaving the classroom, he turned to me and angrily spat, “You old Bald Eagle!” I took offense. Not at the words but at the disrespectful attitude.

Many kids just do not think ahead. Insulting the teacher the week before Back To School Night can be risky practice especially if Momma is going to be visiting the teacher.

I told Jamal’s Momma about the exchange and she was not pleased. She scowled at Jamal. I explained, “The bald eagle is one of my favorite animals and I like it as both an animal and as a symbol of freedom. If I ever get reincarnated I’d be happy to come back as an eagle. But…” Then I gave Jamal my most withering ‘Dirty Harry’ stare as I said, “I seriously doubted if Jamal meant calling me a Bald Eagle as a compliment!”

Jamal was busted but he started to quietly laugh. I even had to flash a grin at the absurdity of it all. Momma was still not pleased.

So, which matters more, who says it or how it is said?

2 thoughts on “Insulting the Teacher”