Assembly to help the grief-stricken

Of course, many of our students already knew of the incident. A gunfight is always an inexhaustible topic for enthusiastic gossip and this was no exception (see also: How I Got Gangsta Street Credit Without Getting Shot and The Gun in My Classroom and Gangstas Have Cars). But we were required to act in loco parentis (in the place of the parent) so we held a whole-school assembly to counsel the grief stricken and quell all the loose talk and gossip.

There were a few kids who were grief stricken. The sudden, violent death of someone you know can have that effect. But mostly it was loose talk and strange attitudes that needed our guidance (or scorn). For example, there was a faction among the students who wanted to erect a memorial monument to their slain classmate. We adults quickly put an end to that suggestion, saying there was NO WAY we were going to memorialize a kid who was killed while committing a violent felony.

An all-school assembly can quickly descend into a rather chaotic affair so we elected to take our students back to our homerooms and attempt thoughtful discussion, and (hopefully) give sage adult advice about law and order. What happened in our classrooms stunned us.

Ms. Jones taught English. Imagine a sweet, kindly Maya Angelou, grandmotherly sort of woman and you’ll have an accurate picture of Ms. Jones. She really cared for the kids. She really tried to show them the error of their ways. She let the kids express themselves – we all did – that’s part of good teaching or good parenting. It brought her to tears to recount, that while talking among themselves, the kids said, “Man! Why did those fools try to rob a furniture store? They should have just jacked-up some old lady!”

It wasn’t any better in Ms. Curtis’ room. I’ve written about Ms. Curtis before (see Teachers Are Older Than Dirt and What Happened to David). She was our other English teacher. She and I shared a two classroom bungalow. In her class the kids solved the problem of the gunfight by saying, “Man, they should have gone in blastin’. That way, nobody would have got hurt.”

Ms. Curtis tried to point out the speciousness of their logic. “What do you mean ‘nobody would have gotten hurt’? What about the store owner?” The kids (or at least those who spoke up) didn’t see the store owner as one of them therefore he was ‘nobody’ and fair game to be shot. 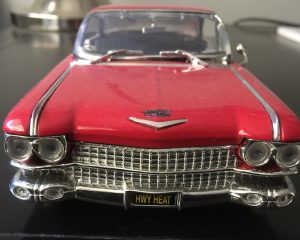 I’ve written before that I’m an openminded kind of guy and I have the patience of 10,000 holy men. But this… skewed thinking and violent drivel quickly moved me from kindly forbearance to verbal wrath and smiting. So, I started with an insult and a question and had this exchange:

What do you say to thinking like that? Harsher laws and tougher penalties won’t help because the basic thinking of these criminals is flawed. Everything they did was against the law and they did it anyway. I said it before in Gangstas Have Cars, we need to spend as much time and energy understanding and teaching about the incentives to join a gang or commit a crime as we do on understanding and teaching about how to get into college. The study and understanding of these gangsta incentives has to go beyond just, “They needed money cuz they had none” or, “They’re all just crazy savages.”

Watch this space to learn more…