One more issue to be polarized over – Standardized Tests 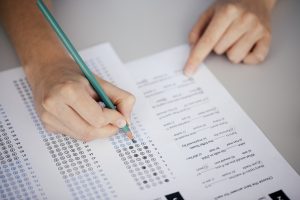 Let’s not throw the baby out with the bathwater. We need to assess, evaluate, judge, test or whatever euphemism makes you comfortable. Many of us just don’t absolutely need what currently is used for standardized tests.

We just got through testing (and graduation) season and a new semester is upon us. There have been the usual complaints about standardized tests. I agree with all of them. Some universities have even stopped considering the SAT and ACT. I agree that standardized tests in the aggregate show us more about financial background and demographics than they do about actual skill levels or individual motivation. More importantly, for the lower grades, standardized tests don’t do a good job of telling us what to teach, or how to teach it.

I have encountered many adults (and that includes parents, administrators, and some teachers) who seem to assume that just because a child has reached a certain age or grade level that they are ready for whatever academic rigors that class or grade level demands. It ain’t necessarily so. My experience has been: you can’t just teach a ‘one size fits all’ Algebra (or any other) curriculum due to social promotion [for a more complete discussion of the destructive practice of social promotion read: Unspoken Obstacle]. Don’t assume that we can ‘Just bring them along’, as I’ve often been told to do.

If we are to reach each child, we teachers need to know what to teach each particular child, and how to teach it. The best way to accurately do that is through some sort of assessment. Few who are against standardized testing have put forth a solution to the need for assessment and what kind of assessment will tell us what we need to know. If you think all assessment is suspect and does no good you can stop reading now. My experience has been that some sort of assessment is necessary – just not standardized testing as it is done today. Here’s why I believe that, and what I did to assess my students.

How to teach it.

I’m not taking the party line (the necessity of standardized assessment) here. I’m just pointing out my experiences. I will address what to teach and how it relates to testing in a minute, but first, a note about how to teach.

I have been coaxed, cajoled, and reasoned at, by advocates for numerous teaching strategies (didactic lecture, socratic investigation, projects – both individual and group, games and computer directed variations on all of the above). Most of the strategies were pretty good. Those who constantly advocate relevant or interesting or individually chosen curricula forget two important points. 1) It is vitally important to remember that what works with one student, class or school might not work with another (I’ve said this before). 2) To be creative in anything takes time. In education it takes time to get to know the lesson or strategy and time to get to know the students.

This idea that we teachers need a lot more time if we are to substantially improve education in America runs through all of my writing. I was lucky enough to work at an alternative school where, at times, we actually had the low numbers (i.e. pupil teacher ratios) and the time. We occasionally had time to genuinely be creative in our lesson planning. We occasionally had time to get to know our students. When we did have more time, we saved lives. Unfortunately, budget constraints blew that out of the water (our numbers swelled and our time was eaten up by standardized testing and standardized instruction models). Because of the wide range of skill levels entering my classroom, I felt I had to grade every paper and I never relied on standardized tests. Here’s why:

In my Algebra classes, I gave every student entering my class a 60 problem constructed response assessment so I  could obtain empirical data as to their baseline skill levels. Students were not allowed to use a calculator or notes.

[For those unfamiliar with the term: When I use ‘constructed response’ it refers to a test in which the student must not only supply the answer
but also show their work or the process of their thinking
(i.e. what do you know, what did you figure out, how did you figure it out)

The standards covered in the assessment ranged from 2nd to 6th grade with little or no reading required – it was basic computation.  I also gave a 50 problem constructed response Algebra readiness test which included verbal problem solving as well as computation.  I did this because the standardized, multiple guess, test scores in student records did not give me enough reliable information to help my students.

In 20 years of teaching, the mean computational grade skill level of students entering my Algebra class (ages 14 to 17) was 3rd grade and the mode was 4th grade.  The mean and mode skill level of Algebra readiness (ages 14 to 17) was barely 2nd grade.  Yet I was required to call the class Algebra, and give every government mandated standardized test as if the students had entered my class at grade level! As a result, despite turning their lives around, students who worked hard to make up for lost time, students who made up three or four or five years of missed learning might still test out as ‘below basic’ which was demoralizing to them.

Also, there would be no way to show that I was doing a good job because there was no accommodation in teacher evaluations for teachers working with students entering class below grade level.

I got in trouble over Standardized tests.

I was attending a District mandated after school faculty meeting during which we were to review the latest standardized test scores. I had been killing myself with grading every piece of student work for years by that time, and I knew my assessments and my kids pretty well. I wasn’t trying to undermine the meeting. I was just not participating with my usual motor mouth good humor. My boredom or contempt must have shown on my face because the principal called me on my apparent lack of participation.

I told him that the standardized test scores did not tell me anything new. The tests scores weren’t even telling me what I already knew about my kids. I said, “Look at Javier’s scores. It says here that he has mastered trigonometry. I have never covered trig with him. He was just starting to learn fractions, and though working hard, he was struggling with it. Now lets look at Andrés and compare him to Stephanie. Stephanie worked the whole time allotted for the test and stayed after to work extra. She scored below basic. Andrés worked for five minutes. He filled out the Scantron in a beautiful pattern reminiscent of the decorations you might see on a Mayan temple. He also scored below basic. What do I teach them? Where do I start?

I offer my own fix: Constructed Response

I don’t trust multiple choice – multiple guess tests. How did Javier demonstrate mastery of trigonometry? There were only three questions on the test which dealt with trigonometry and he guessed right on two of them! Multiple guess tests don’t show process or allow for small errors (more on this in Part 2). That’s because there is one right answer and all the other answers are equally wrong.

Neil deGrasse Tyson gave a motivational speech at Western New England University. It is known in online searches as the Spelling Bee Speech. Tyson gave a hypothetical example of three contestants spelling the word ‘cat’. The three answers given were ‘cat, kat, and xqw’. Tyson then points out that kat is equally wrong as xqw, yet kat makes even better sense as a spelling than cat. Rather than review the whole speech I’ll jump to the ending. Mr. Tyson makes the point that knowing how to think is more important than [I would say ‘as important as’] knowing what to think. This echoes the famous Einstein quote, “Imagination is more important then knowledge” (however it is arguable whether or not imagination is thinking).

Imagination without a base of some knowledge is limiting. Even Mr. Einstein had to get help with knowledge of geometry before he could bring his imaginative ideas to fruition. [Isaacson, Walter. Einstein His Life and Universe. New York, 2007. Simon & Schuster. p. 33]

Memorization is to process as knowledge is to wisdom

Memorization and rote learning have gotten a bad reputation over the past few years, yet they are vital to any sort of clear thinking. You memorize the language you speak. I had a Korean student who was improperly placed in my American Literature class. He had only been in the country for about three months and he wasn’t even conversational in English. Yet I was required to test him as if I’d had him in my class all year (which I did not), and as if he could read and speak and write English as well as any American born 11th grader! [see: Where is Planet Reality?] I could have given him a dictionary, or a computer translator but he still would never be able to keep up without memorizing a lot more English.

You memorize how to get home. My special ed. class had students so cognitively challenged that they couldn’t be allowed off their bus without an adult present to make sure they got home safely. [read: How School Broke My Heart] Why was that? Because they were unable to memorize the way home and they were so easily distracted and/or dismayed that they could get lost for any number of reasons.

I’m not the only one!

Those are a some of my experiences but I’m not the only one who values facts as well as analysis and process. In an article in Forbes [July 1, 2018 https://www.forbes.com/sites/nataliewexler/2018/07/01/three-things-schools-need-to-do-if-democracy-is-going-to-work/#5e5c5a803960], Natalie Wexler makes a wonderfully compelling argument that the future of democracy depends, in part, on teaching facts. I’ll quote some  of Ms. Wexler’s highlights here:

“… The American education establishment needs to shed its aversion to teaching facts. …The idea [of this aversion] is that it’s better for students to “construct” or discover their own knowledge than to be passive receptacles for a “bunch o’facts” that will only bore them. Ideally, teachers will just impart cognitive skills that students can use to acquire and analyze information for themselves. But when students don’t know much about a topic, it’s extremely inefficient—at best—for them to try to construct their own knowledge. At worst, they’ll “discover” facts that are just plain wrong.

It’s not that students are incapable of learning such things or that high school teachers haven’t tried to impart them. It’s just harder for people to absorb and retain new information when there’s no preexisting knowledge for it to stick to.”

You need some memorization or rote factual knowledge to be able to process information or to perform a process of thinking. This ability to memorize a fact and then apply it in some rational process is the beginning of wisdom. Assessing this knowledge and ability requires time and a different approach than only Standardized testing.

How this relates to math testing (as well as other subjects) and how I handle it is in Part 2.