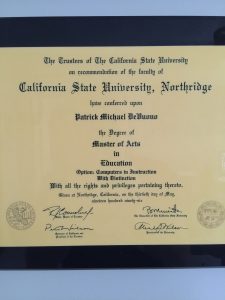 We educational experts are taught to use progressive discipline and then if that doesn’t work, call home. LaQuan and his friends were not working. They were gossiping and frequently calling each other niggas. I told them to get on task and to not use that word. I explained that there are many people for whom that word is considered offensive. I got the usual arguments about the word (I’ll talk about those arguments in a later post). I emphasized that I don’t allow its use in class or anywhere else on campus. This is part of my progressive discipline.

When this line of behavioral management failed I progressed to the threat of calling home. That got no respect so I called home on each boy.

I called LaQuan’s father but only got an answering machine. I left a message in which I outlined the behavior and I requested a call back to discuss it. I never got a call back.

The test and the consequences

A few weeks later I was giving a test to the class and I warned them not to talk. I warned them that if they talked to anyone at any time I would have to consider that cheating and I’d rip up their test.

LaQuan didn’t take me seriously. He finished his test and as he walked up to hand it in he stopped off and started talking  to one of his friends (at that time they both were in possession of their test papers). I stood up and took their tests and ripped them up (just like I said I would do). LaQuan took offense to me doing what I warned them I’d do and he shouted, “Man! Fuck this class!” I sent him to the office.

Please understand. I’m not about to award a failing grade to someone just for forgetting a rule or for a little bad language. I was simply enforcing my rules. I have a reputation for being strict, consistent and yet willing to compromise. I’d have been happy to let them take the test over again at a later time as long as they followed the rules.

However, dropping the ‘F’ bomb in class is an offense that draws a suspension. The Dean of students prepared the paperwork and called home to LaQuan’s father. That got a response.

“You should have known what to do.”

LaQuan’s father called the school district headquarters (such calls can be deadly to a school or a teacher). He called the school and then he insisted on a meeting of all concerned. The Dean and I attended. Then I had to listen to LaQuan’s dad lecture me about how I was wrong to upset his son! He kept saying, “You’re the educational expert. You should have known what to do.”

I’m sorry to say, I apologized for upsetting his son. I didn’t want to apologize but I know which way the political winds were blowing and I was a few months away from retiring. I’d heard too many stories about a kid complaining and then the teacher getting sent to ‘teacher jail’ or worse,  losing their pension. Why take that risk when I had NO support from the father?

What I wanted to say is, “Yeah, I’m the educational expert and what your kid needs is a serious application of ‘Foot in Ass Technique’ which is what I gave him!” 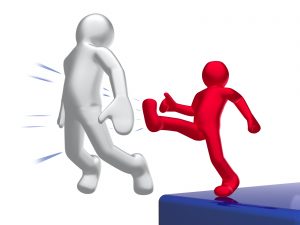 I was at a meeting with a bunch of NBC teachers and I felt like I was with those who understood and I said, “What that kid needs is foot in ass technique.” Some of those assembled gasped in outrage over the vulgarity and violence of such a suggestion. I quickly explained that ‘foot in ass technique’ was simply a catch-all metaphor for what B.F. Skinner would call ‘negative reinforcement’ or negative consequences. I only used vulgarity to draw attention to my point. I do not advocate violence in behavioral management.

The idea is that once positive reinforcement has been offered and failed, the educational expert (in partnership with the parents) needs to have a negative reinforcement that is meaningful to the child. For some kids it’s simply the idea of calling home. For others it can be as serious as grounding them or – God forbid – taking away their cell phone.

Classroom management will always be problematic. I’ve seen lamentable behaviors from all parties. Don’t expect education in America to dramatically improve anytime soon until we can get a little more support from parents about their children’s behavior. And don’t believe any politician who says that they are going to fix education. If they don’t address the behavior issues of children – they haven’t a clue.