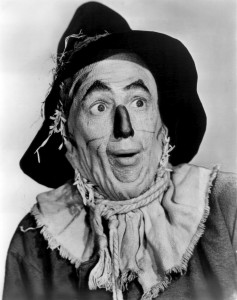 Have you ever seen the 1939 MGM movie The Wizard of OZ (the one with Judy Garland)?  Does that sound like a strange question, seeing as The Wizard of OZ is generally considered as one of the best-known films in American culture?  I like to use it to teach but, believe it or not, most of my students had never seen it!  True!  I’d mention the Scarecrow from The Wizard of OZ when teaching the Pythagorean Theorem or the difference between a diploma and an education and my kids would look at me with expressions of confusion as genuinely muddled as if I had suddenly begun speaking Klingon.  Oh, my dear under-cultured children!  They also didn’t get the reference to West Side Story when I’d quote, “I’m depraved on account I’m deprived.”

You, however, have seen The Wizard of OZ (or even if you haven’t I’ll review enough for clarity) so let’s talk about what The Wizard of OZ can teach us about the difference between a diploma and an education.  This is important because here in Los Angeles (and I believe elsewhere) we are being told that high school graduation rates are up.  Sounds good, but don’t be fooled by this statistic.  It grieves me to say this but, getting a diploma does not always mean you got an education.

In The Wizard of OZ the Scarecrow tells us he wants a brain,

I would not be just a nothin’
my head all full of stuffin’
my heart all full of pain.
And my head I’d be scratchin’
while my thoughts were busy hatchin’
if I only had a brain.

and after a series of trials and tribulations the Wizard tells him that the only thing he really lacks is a diploma, at which point the Wizard awards a diploma to the Scarecrow.  The Scarecrow, reveling in his award, gushes, “Oh joy, rapture!  I’ve got a brain!” and putting a finger to his forehead recites a seemingly complicated mathematical formula which is, in reality, an incorrect bastardization of the Pythagorean Theorem [For the Geometrically curious: the Scarecrow says, “The sum of the square roots of any two sides of an isosceles triangle is equal to the square root of the remaining side.”  When what he should have said was, “The sum of the squares of the legs of a right triangle is equal to the square of the hypotenuse.”].  So what?

First, this tells us that a rise in graduation rates does not necessarily mean a more well educated populace.  Graduation rates could be going up because of grade inflation and/or de facto social promotion and/or cheating.  Pressure on teachers to have no fails in their classes is so great that it dangerously increases the incentive to lower standards on regular grading and to cheat on standardized tests.  Just this morning (April 1, 2015) a group of teachers in Atlanta was sent to jail for cheating on standardized tests [and if you google ‘teachers cheating on tests’ you’ll find there have been cases across the country – a very complex issue too lengthy to go into here, just remember: pressure ± money = incentive to cheat].

Even worse is the growing pressure from parents to get teachers to abandon standards and award diplomas no matter what.  I have witnessed attempts to bribe (or force) us into passing students who refused to do any work (praise and glory on my colleagues from my school for not bending to this pressure).

Finally, and worst of all, is the mistaken impression given to students that a diploma always equals an education.  Even though MANY of my former students have since told me they thought I was a good teacher, they have also told me that they wished they’d studied more.  Many had moaned, groaned, complained and fooled around when they were enrolled in my class (sorry kids but you know, for some of you, it’s true!).

After complaining and asking, “Why do we need to take Algebra, or Geometry?” (mostly because they were improperly placed in those classes before they were ready, due to de facto social promotion, and because I was forced to teach to a one size fits all curriculum), I’d tell them that they valued a diploma more than an education.  To test my theory, I took a poll.  Since they didn’t/couldn’t relate to my story about the Scarecrow, I put it in other terms.  I said, “Let’s see a show of hands.  If you could graduate and get a diploma without taking any high school math and all you had to do was sign a release saying that you voluntarily opted out of math and would still consider yourself well educated without it, how many of you would sign such a release?”

It would break your heart (it surely broke mine) to see how many hands went up.