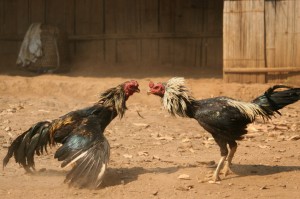 Know when to fight and when to run.

When it comes to violence or bullying (not just gambling), you’ve got to know when to walk away and know when to run.  Let me repeat my previous words of caution: what worked for me may not work for you.  I recommend always following the law; always tell an adult or authority figure when you’ve been threatened or injured.  But as we all know, there are times when there is no help to be had and you have to make a decision on the spot (this is a theme of my book What Happened to David).

When I wrote about getting bullied (see I Was Bullied) I said that there were times when I stood my ground and took a beating and when circumstances were different I wasn’t ashamed to run.  Here are two tales of how I made my decisions.

Stand Your Ground and Walk Away

Antonio and I had been friends for years.  But by the time we had reached 8th grade, his feelings for me changed.  Now, I don’t know if it was some foolish thing I said or did that got him angry, or if it was just the typical adolescent struggle for pecking order and dominance (Mary talks about this concept in What Happened to David).  But Antonio wanted to fight.  I tried to make amends and learn what had upset him so, but there was no changing his mind.  He bad mouthed me in public, hit me and continually challenged me at school (but always out of sight of adults).

The gauntlet was cast down and I finally came to the conclusion that I would have to meet him on some chosen field of battle.  We agreed to duke it out at 4 PM in the alley behind the gas station on 103rd street.

I didn’t want to fight.  I tried to avoid it.  I still considered Antonio my friend (misguided and mistaken though he was).  I couldn’t bring myself to hurt him.  Even at 13 years old I knew enough about self defense to know how to injure another, I just didn’t have the stomach for it – especially in a situation that wasn’t life threatening, with a ‘friend’ like Antonio.  So I made up my mind to show up, spar and wrestle a bit and look for any excuse to quit.

At 4 o’clock I showed up in the alley alone and Antonio was there with five of his buddies for back up.  They were surprised that I showed up alone.  I was surprised he had back up.  We sparred for about a minute with no result until he caught me with a right to the nose.  My nose began to bleed and I took that as my out.  Remember, I didn’t really feel threatened and was unwilling to do any real damage to my adversary, so I took my lumps, and said I’d had enough.  Adolescent honor had been served and I was able to walk away.  Antonio won ‘respect’ for beating me.  I won respect for being brave enough to show up alone.  High school was much different.

Know When to Run

The Dan Ryan Expressway is a freeway in Chicago that runs mostly north and south.  When it gets to the south-side it splits into an east-west freeway.  The only way to get to my high school from my home was to cross the Dan Ryan from south to north by a bridge at Michigan Avenue.  That bridge was a constant source of danger.  There was no other way to get to school or home than to cross that bridge.

One afternoon while I was walking home from school, two guys approached me from the south.  They weren’t from my neighborhood and appeared to have come looking for trouble.  They stopped me and tried to extort money from me.  I refused.  The taller one said. “That’s okay,” and turned as if to leave but instead he wound up and hit me on the jaw as hard as he could.  I saw stars and went to my knees.  The two of them stood there laughing as I glared up at them from the sidewalk.  The taller one again spoke saying, “You going to do something about it?”

I weighed my options.  There I was alone, on my knees, my jaw throbbing, looking up at two guys who were both bigger than I was.  On my right were four lanes of busy Michigan Avenue traffic.  On my left was a 30 foot drop to eight lanes of very busy freeway traffic.  I thought, ‘Honor be damned.  There are a million ways this could go from bad to much worse.’  So I backed out as quickly as I could and high tailed it out of there to live another day.

1 thought on “A Tale of Two Beatings”